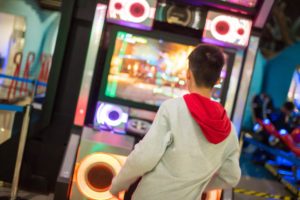 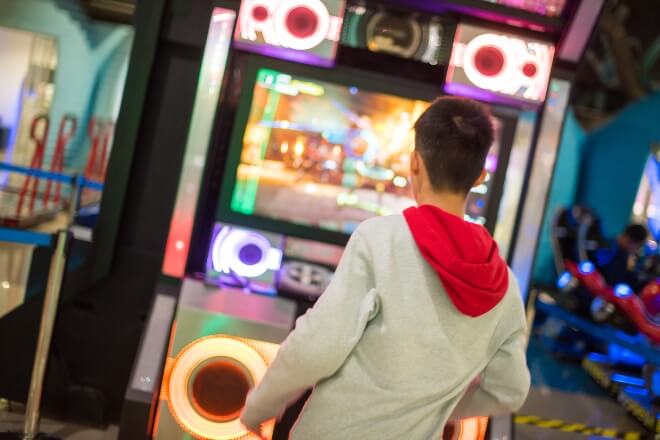 K-Shoot MANIA, have you heard of it? This is probably one of those not so popular but exciting games that you’ve never heard of.

I’m pretty sure many of you have either played or heard of the game Dance Dance Revolution. It’s a popular game in the arcades and on home consoles but what you might not have known is that it is part of a rhythm line of games by Konami called Bemani. Bemani consists of several games like Beatmania. Drum Freaks and much much more.

Here, we’re taking a look at one of the younger entries of the Bemani line - Sound Voltex (SDVX).

Sound Voltex (SDVX) was released in 2012 in arcades and has a few sequels. Unfortunately, not only were all these games only released in Japan, but they’re also only in the arcades. Therefore, finding a way a play SDVX isn’t easy. But thanks to the lovely fans out there, an emulator for PC exists called K-Shoot MANIA.

The game was released in 2013. Also, what’s interesting is, SDVX has a backstory and K-Shoot MANIA does not. No worries here because most persons interested in playing rhythm games don’t care much for backstories since they aren’t directly controlling a specific character in the game.

The goal of this game is to hit keys and effect buttons and turn knobs to the rhythm of the music.

It’s really not. Here’s why…

The game has ridiculously chaotic on-screen graphics and dynamics that can easily get you flustered, crazy difficulties and unconventional game controls.

But not to worry. Stick with us and you’ll be well on your way to taking on what could be the greatest challenge of your gaming life.

How to Play K-Shoot Mania: 5 Steps

Now that you know what K Shoot MANIA is...

K Shoot MANIA is a music game for Windows. Therefore you need to have this operating system to play the game. Once you’ve got this covered it’s time to get the game.

Head over to kshootmania.com/en/download.html to get started.

The site gives you the option to either download the Full Version (Software + Default Songs) or the Updater (for overwriting the older version).

This game has incredible gameplay effects and graphics so it’s important to always keep updating the software whenever the developer releases new ones.

Frankly, since K Shoot MANIA is merely a simulator of Sound Voltex (SDVX) which is an actual hardcore arcade game, finding a manual might be nearly impossible. That’s why we’re here (high five).

The arcade version has a demo of the game which loops on the attract screen when no one is playing. This serves as both a way to attract newcomers to the game and as a guide for how to play the game.

This game is computer based so there is no demo on the screen. You just have to, practically, learn the ropes as you go.

The game comes with a "skill analyzer" mode which allows players to test their skill level. This is a great way to get your feet wet when starting out.

The standard controller for the arcade version has six buttons and two knobs for gameplay.

The layout is four BT Buttons in a row, two FX Buttons below and two knobs on the left and right. There’s also a “start” button and a “back” button.

During gameplay, the left knob shows up as a blue laser and the right knob is a pink one - on the default skin.

You must twist the knob, left or right, at the speed the laser is moving.

On screen, there are white objects called BT Objects that appear in four lanes. There are four keys (BT Buttons), one for each lane. You can also hold the buttons for sections of long BT Objects.

Many times BT and FX Objects overlap, forcing you to hold down one and tap the other. These different combinations can make the game extremely challenging.

But why am I telling you about arcade controls when it's a PC game?

Well, because the default control settings are similar on the keyboard. And if you want to be efficient, you must understand how they are supposed to function.

Also, many avid players either create custom controls with BT Buttons, FX Buttons and Knobs to not only get the arcade feel but to gain an advantage over someone using a regular PC keyboard.

Of course, not everyone has the time or skill to create their own game controls so there are companies that specialise in manufacturing Bemani controllers and they teamed up with the creators of this game to be able to give PC players that "arcade feel".

As the player hits the objects, a judgment from highest to lowest is received - CRITICAL, NEAR, and ERROR - depending on the timing while hitting objects. (For long objects and Analog Devices, CRITICAL and ERROR only.)

CRITICAL fills the rate gauge, while ERROR depletes it. (In late updates, NEAR also fills the gauge, but only with 1/4 of the amount that CRITICAL fills)

This is the default rate system that all players being with. Its initial value is 0%.

To clear a stage while on this rate, the player is required to fill 70% of the rate gauge before the stage ends.

When playing multiplayer, if at least one player clears the stage those who fail will instead be SAVED, and they can continue the play session. (Note: multiplayer mode isn’t available on current versions of K Shoot MANIA)

This is the rate system added in one of the later updates. Its initial value is 100%.

Using this rate, a player must complete the stage without letting the rate energy fall to 0%. If the rate gauge is fully depleted before the stage ends, it's an instant TRACK CRASH.

The player receives a different clear medal when clearing a stage with this rate.

The SAVED system is available when using this rate since the player is instantly retired from the match when receiving TRACK CRASH.

This rate system is used in Skill Analyzer mode. Its initial value is 100%

This rate system is used for Blaster stages. Its initial value is 100%.

Step #5: Use our K-Shoot Mania guide

At this point, it should be very clear that it can be a pretty complicated game (especially if you have no previous knowledge of the Sound Voltex games or any rhythm game for that matter).

This article is really just the start. To really get all the advice you need to master the game, you need to use our K-Shoot MANIA guide.

Our guide can help you understand the setup, stages, bonuses, and tactics that you need to place yourself amongst the best players of the game.

The difficulty of the game is presented in a numbered system form 1-20. Also, each track usually contains four types of effects ranked by difficulty:

NOVICE which is easy,

ADVANCED which is medium,

EXHAUST which is hard and

MAXIMUM which is sort of like a master mode.

For those songs that weren’t originally included in the MAXIMUM difficulty, these are mostly songs released in later editions of Sound Voltex, it will be added later.

However, there are also GRAVITY, INFINITE, and HEAVENLY effects for some tracks. These effects are harder than EXHAUST or are at the same level but completely different from EXHAUST. The player cannot simply unlock them in Sound Voltex “Station”, instead they can only be unlocked by playing Blaster stages.

To unlock GRAVITY, INFINITE or HEAVENLY for a track, the following is required:

To charge the Blaster Energy, you must simply play the stages with the Excessive Rate system.

Once the Blaster Energy is full, both Blaster stages and EXTrack are available.

Open up the Blaster stage category, and select the effect you want to unlock.

Each effect contains a Barrier Track, which is the stage you must then play.

A Full gauge of Blaster energy is consumed for each Blaster stage played or for access EXTrack.

The rate system is locked in the Blaster Rate system. Like the Excessive Rate, you are required to complete the stage without letting the rate energy fall to 0%.

The higher the Barrier Rank, the harder the gauge falls. NEAR also depletes the gauge if the rank is high enough.

This cycle is repeated until the Target Life is reduced to 0 and the player can get the effect.

From Sound Voltex 4 onwards, the Infinite Blaster unlock system has been renamed to Blaster Gate.

Looking to satisfy your next gaming fix? We’re here for you.

Check out these other game guides and overviews that we have to offer:

K Shoot MANIA could easily be one of the toughest rhythm games out there.

It challenges your reaction, timing and focus. It also allows for creativity because it allows you to create your own tracks as well.

If you’re ever looking for a game that can give you that "arcade feel" from the comfort of your home, this is it.

This PC simulator is constantly updated and released to give gamers the best and smoothest experience possible. It’s a great challenge that should be sought after.