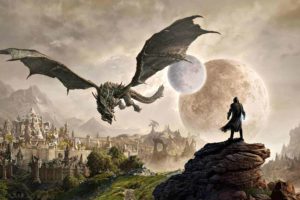 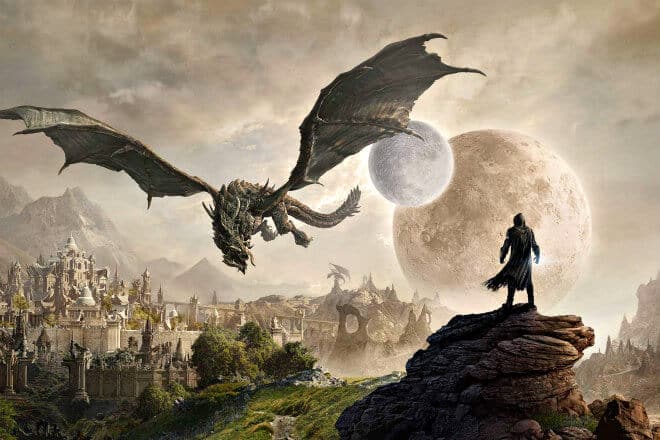 If you’re a sucker for adventure, action, and community, elder scrolls online (ESO) is the game for you.

This massively multiplayer online role-playing game (MMORPG) is one for the ages. Its latest edition was released in 2014 for PC and Mac. The PlayStation 4 and Xbox One versions were later released in 2015.

The game has a Buy-To-Play model, where you must purchase the game for a flat fee and play for free afterward. However, there are upgrades and membership bonuses that make things somewhat interesting.

The ESO franchise boasts an unmatched exploration of rich worlds. Combine that with the scale and social aspects of a massively multiplayer online role-playing game and you’ve got a hit.

What is Elder Scrolls Online?

The latest edition of the elder scrolls online game is set in Tamriel, a world full of chaos.

The player begins as a prisoner, referred to as Vestige throughout the game. Vestige’s soul has been taken (this allows him to be reborn every time he dies during gameplay) and he’s imprisoned in Coldharbour in the realm of Oblivion.

Ancient prophecy in the Elder Scrolls revealed that Vestige will thwart the plan of the villain - Molag Bal whose plan is to merge the world of Tamriel with the realm of Coldharbour in Oblivion.

Molag Bal is harvesting souls for more power but

Vestige is assisted by the Prophet and Lyris to escape Coldharbour. This frees the prophet but imprisons Lyris with Coldharbour.

After being freed, Vestige awakens in a chaotic world - Tamriel to fulfill the prophecy of the elder scrolls.

How to Play Elder Scrolls Online

Initially, Elder Scrolls Online might seem intimidating because there are tons of options to choose from but the more you play, the better you’ll understand what you like and what you don’t. You must take some time to create and design your character well.

While ESO is a game that is less constraining than many others in terms of what you can do with your stats and abilities as you level up, it is not advised that you pick a class or a race with traits that you do not plan on using.

Select an option that offers a play style that you are happy or comfortable with, at least for the start of the game.

The game world in ESO is very large, as with all the other Elder Scrolls games, with lots of areas to explore and lots of things to do. In the beginning, the sheer size of the game world might seem daunting, but the tutorial areas are there to get you up to speed. Ensure you watch all of the tutorials and you’ll we well on your way.

The game is quite flexible with how you're allowed to assemble your character. A large number of customization options for you are at your disposal. These include Class, Race, and appearance.

Your Class provides your character with unique abilities and decides what type of warrior he will be. Whether you prefer to get up close and personal in a battle or to stand back and deliver blows from afar off, you can select your class based on your battle style.

Many players tend to skip this part. Don’t let this be you.

This tutorial will help you to understand how the world of Tamriel is set up and what is expected of you when you’re in gameplay.

After seeing the tutorial you will understand that you can explore the game at your own pace and that there’s no right or wrong way to play.

This is the key to being efficient in elder scrolls online.

As much as you can explore and move through this game at your own pace, there will come times when you’ll need to be quick and reactive.

Whether it be Xbox One, PlayStation 4, or Mac, take your time and get used to the controls on whatever platform you’re playing.

4. Learn how to level your character

Level up your character to earn Attribute Points. These points are used to improve your Attributes - Stamina, Magicka, and Health.

Stamina determines how long you can utilize your physical abilities.

Health dictates how much damage you can take before you die.

Find and eat food to add more to your regular stats. If your character is sneaky, you can steal food from the kitchens but if you learn the Provisioning Skill Line, you’ll be able to make your food.

Get to the capital, learn how to unlock the Provisioning Skill Line and use fire to cook up some food to boost your character’s stats.

During your adventures, you’re sure to find a lot of great items. Your inventory space and Bank needs to be large enough to facilitate all of your findings.

These upgrades will cost gold but it will surely be worth it.

6. Use our elder scrolls online guide

This game is complex. You’ve got so much to do and you can get lost and seem like you’re just going in circles.

That's why we’re here. Getting the most out of the game means to understand each facet and how they relate to each other.

If you want to take full advantage of every weapon, skill, bonus and every aspect of gameplay, you’ll need to move beyond just a surface introduction.

Our elder scrolls online guide goes beyond the surface level and into the nitty-gritty of gameplay.

This guide will walk you through all that you need to master to become an expert.

In ESO, there are pre-established character types. These are referred to as classes. There are five classes. Here are three interesting ones:

This class is least recommended for new players, as it is the hardest, but very beneficial to learn fully. The low defense, yet high offense, can fit very well with players that learn how to use the playstyle correctly.

This class is suited for dealing high amounts of damage and shielding themselves from damage with conjured wards.

The Sorcerer is good for long- ranged players, as the high offense, yet relatively low defense generally keeps the player at least a few meters away from the enemy.

The ability to summon creatures in combat can be used to keep distance between the player and the enemy, and in the most dangerous situations, the teleportation ability may be used to avoid large sums of damage.

Nightblades are suited for stealth and surprise attacks rather than survivability. However, they do feature health-draining skills.

If you’re a fan of the stealth genre, the Nightblade is the class for you. It excels in stealth-based gameplay and is highly enjoyable and effective.

They can be built into highly efficient Assassins to carry out conquests.

These characters have extremely high damage, mobility, and stealth at the cost of defense. Dual-wielding assassins have the highest physical damage in the game and can also weaken their enemies, making them a force to be reckoned with, if played right.

It is important to note that personal skill of the player is the deciding factor of the effectiveness of the Nightblade class, recommended only for players that are adept in stealth games, or have very good reaction time.

The is the most versatile class in the game. The Templar excels in every role of combat.

This class has great damage-absorbing skills and shield-based abilities, defensive passives and anti-undead skills allow building classic Paladin type characters which, arguably, have the highest survivability in the game with excellent defense and self-healing abilities.

The Templar's only real weakness is their low mobility. This, however, does not matter too much as the Templar is great at holding its ground.

The Templar class is recommended for all new of the game.

You must select a class while creating your character before gameplay. It is important to note that certain elements such as race impact class selection.

Each character class features a specialization, several major skills, and an increase in attributes at level up.

If you’re up for group activities, joining a guild is ideal. ESO Guilds are groups of players with similar interests working collectively in the game.

A level 10 experience, or more, is needed to start or join a guild. The number of guilds you can join, per account, is limited to 5. Therefore, choose your guild wisely.

Guilds can be used to store items. Each guild has a bank for this purpose. Guildmasters can determine what level of players get to deposit and withdraw items from that bank.

ESO Guilds also have stores. Here, players within a guild can buy and sell items among themselves. Many guilds are created for the sole purpose of trading coins for items. It is allowed.

Looking to satisfy your next gaming fix? We’re here for you.

Check out these other game guides and overviews that we have to offer:

Elder scrolls online is that massively multiplayer online role-playing game that you must have. With its wide range of activities, action, and customization, there will never be a dull moment.

Follow our guide to getting started on your new journey as you seek to fulfill the prophecy in elder scrolls online.