The holiday season is just around the corner, and that means one thing: sooner or later, you are bound to find yourself wearing a Rudolph sweater and playing Christmas party games while sipping on eggnog, mulled wine, or a cup of steaming hot chocolate!

So, why don’t you brush up on your games knowledge and check out our selection of the best Christmas party games? Who knows, you might even learn some cool new ones!

These are the absolute favorite games to play with friends and family in December.

Arrange a bunch of chairs in a circle, making sure the number of chairs is one less than the number of players. Blast a classic Christmas tune and have everyone circle the chairs until the music stops. At this point, everyone must sit on the chair closest to them. The one person left standing leaves the game. Then, remove one chair, put on another Christmas song, and repeat the steps above until there is only one person left.

Also known as Dirty Santa, Yankee Swap, or white elephant gift exchange. Each participant brings one wrapped, usually low-cost and comical gift. The first participant selects a gift and unwraps it. All subsequent participants then take turns choosing to either open a new present or steal someone else’s. If your gift gets stolen, you can then pick a new one from the pile or steal one from another participant. Each present can only be stolen once per turn. The game is over when all participants have gifts.

You need a sturdy white paper plate and a pen for each player. Everyone places their plate on their head. The facilitator gives the following instructions for the participants to draw on their plates without looking: 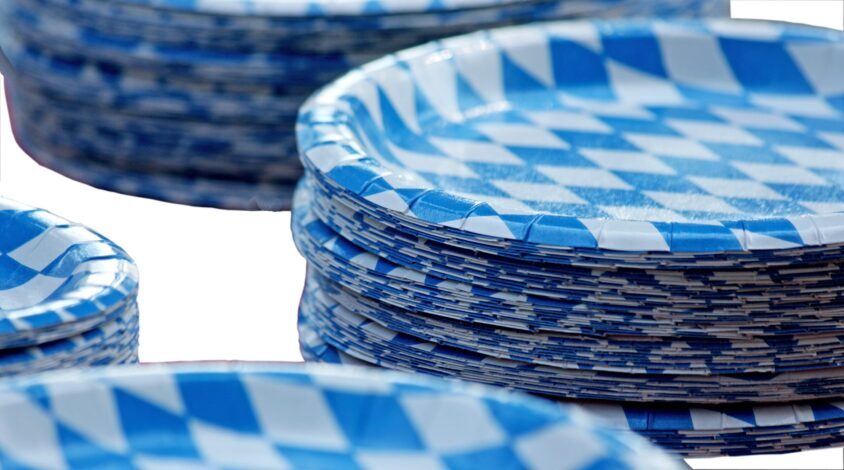 Children love this time of the year, so they are bound to love these Christmas games for kids too!

Arrange twenty Solo cups in two bowling pin formations (ten cups each) at the opposite ends of a table. The two players stand at each end and take turns tossing large jingle bells towards their opponent’s cups. Each player gets to toss two balls per turn. The first one to get a bell in every cup wins.

All you need is a pair of mittens and an equal number of wrapped candies or chocolates for each team. Place the mittens and the candy at one end of the room and line the children up at the other end. When you say “Go!”, the first player from each team must run down to the mittens, put them on, take a candy, unwrap it, and eat it. They must then take the mittens off, run back to their team, and tag the next kid. The relay continues until one of the teams manages to eat all their candy.

Split each team and have the two halves face each other some 15 to 20 feet apart. Hand a two-gift stack to the first player from each team. They must race to the opposite side of the room and hand the presents to a teammate, adding one more gift to the stack. That person must now carry three gifts to the other end. The next person will have to carry four gifts, etc. If a player drops their gifts, they must return to the starting point and try again. The first team to successfully carry all their gifts across the room wins.

Fun and games are not just for children — as proven by these awesome Christmas party games for adults.

The rules are simple. Put on a classic, cheesy Christmas movie and take a sip of your drink whenever you see Santa, you hear a Christmas song, or any cliched lines.

Cut out a piece of paper and write “You’re it” on it. Fold it up and put it in a bowl with other blank pieces of paper. Then, have each participant pick a piece of paper without showing it to anyone else. Whoever has the piece saying “You’re it” plays a key role. When they take their Santa hat off, all other players must also take off theirs as quickly as they can. The last one to take off their hat loses.

9. “Never Have I Ever” Christmas Edition

Play everyone’s all-time favorite party game — but this time, with a Christmas twist. Find out who’s on Santa’s naughty list this year by asking questions such as “Never have I ever been kissed under the mistletoe by someone who was not my partner at the time,” “Never have I ever secretly opened a gift before Christmas Day,” or “Never have I ever hated a secret Santa present from a coworker.”

What better way to spice up the last days at work before the holidays with some office Christmas party games? You can also play these office games on your lunch break or at the Christmas lunch or dinner with your colleagues!

For this one, you’ll need tree decorations such as plastic ornaments, stars, tinsel, garlands, and Christmas lights. Divide your coworkers into teams of 3–5 people. One player from each team will have to (be) volunteer(ed) to be the “tree.” When the judge gives the signal, the teams will have 90 seconds to deck out their coworker to the best of their abilities. The judge then gets to decide who did the best job.

What could be more fun than a makeshift obstacle course in the office? From hopping from chair to chair and crawling under desks to “printing paper is lava,” the only limit is your creativity. And the rules couldn’t be any simpler: whoever finishes the obstacle course for the shortest time wins!

Divide your colleagues into teams of two or more. One person on each team gets to be a “snowman.” Give each team an equal number of toilet paper rolls and tape. They are also free to use additional accessories such as scarves, mittens, hats, or orange paper for the nose. The team that completes their snowman first wins!

5 Minute To Win It Christmas Games

Quick, super fun, and deceptively simple: minute to win it games are everything you look for in Christmas party games — and then some.

Divide the participants into teams of two. Attach a yardstick to each person’s waist. Tape a roll ribbon at the end of one of the sticks and tie the ribbon to the other teammate’s stick. Without using their hands, each team must transfer all the ribbons from one yardstick to another.

Take an empty tissue box and fill it with white ping pong balls. If you are feeling extra creative, decorate them to look like snowman faces. Tape the box to the player’s backside. They then have to shake all of the balls out of the box before the time runs out.

To play this game, you need Vaseline or petroleum jelly and a medium-sized, red craft pom-pom stuck on the end of a 7 to 8-inch ribbon. After applying Vaseline to their nose, each player holds the ribbon between their teeth and starts swinging the pom-pom and trying to have it “stick” onto their noses within the 60-second time limit. The pom-pom must not touch the players’ hands or any other body part.

The first player that manages to pop ten balloons within 60 seconds and while wearing thick winter gloves wins!

Place 10–15 candy canes on a table. You can lay them out flat or crossed over in a heap. Holding a candy cane in their mouth, each player leans over the heap and tries to hook as many canes as they can without using their hands. The winner is the person who manages to hook the most canes within the one-minute period.

Here is a downloadable and printable jpg/pdf list of Christmas party games (right-click the image and select Save Image As...):

How To Pick The Best Christmas Party Games

How do you know which one is the best game to play at this year’s Christmas party?

1. Consider The Age Of The Participants

As a rule of thumb, adults tend to prefer humorous, creative, or naughty “sit-down” games. In contrast, kids like games that involve a fair bit of screaming and running around!

2. Keep It Fun, Quick, And Original

A party game is only any good if everyone is enjoying it. To make sure that all participants are engaged and entertained at all times, keep your games lighthearted and relatively quick. The last thing you want is for people to start getting bored!

3. Try Out A Bunch Of Games

Don’t settle with one game only, no matter how good it might be. It’s much better to mix and match and try out a few different games throughout the course of the party. Different people have different tastes, and not everyone might like your first choice.

Did you enjoy this awesome selection of Christmas party games? We, for one, will be definitely trying some of these games out this holiday season!